Air pollution has been linked to a variety of health concerns and conditions. We know that it contributes to respiratory issues, heart disease and lung cancer. But now there is growing research that it may have some effect on Parkinson’s Disease.

What is Parkinson’s Disease?

Parkinson’s Disease (PD) was first discovered in 1817 by Dr. James Parkinson. It’s a slowly progressive, but chronic neurological disease. People with Parkinson’s slowly lose nerve cells in the brain that produce dopamine, which in turn affects movement and coordination.

Most people know that Parkinson’s causes tremors on one side of the body in either the hand or the foot. But it can also cause slow movement, balance problems and stiffness or rigidity in the muscles. People with Parkinson’s can also experience the following:

Estimates indicate that at least one million people in the U.S. suffer from Parkinson’s Disease. Repeated head injuries and significant exposure to pesticides and certain heavy metals can increase your risk of the disease. Your chance of developing the disease also increases as you age and men are at a higher risk than women. There’s no known cure, but there are treatments to help manage the symptoms of PD.

Scientists believe a combination of genetic and environmental factors can cause Parkinson’s, but they still aren’t fully sure what leads to the disease. Recent research suggests a link between exposure to nitrogen dioxide in air pollution and Parkinson’s.

What is Air Pollution?

Concerns over air pollution began in the 19th century when smog began to form over large cities like New York and London. As time passed and we became more industrialized, air pollution became more common. It is largely humanmade – the result of vehicle emissions, burning fossil fuels by power plants, manufacturing by-products, chemical production fumes, and oils to heat homes and businesses are the primary sources.

Unfortunately, those types of advancements and conveniences have come with a price. It’s estimated that nine out 10 people around the world breathe air that is unhealthy. Initially, researchers thought air pollution largely caused respiratory illnesses. But now it’s been linked to many chronic diseases. There is evidence that it can lead to lung and breast cancer, as well as lymphoma. In fact, the International Agency for Research on Cancer of the World Health Organization classified air pollution as a human carcinogen in 2013. Air pollution has also been shown to cause heart disease, chronic respiratory illnesses, diabetes, obesity, as well as reproductive, neurological and immune system disorders.

In recent years, more attention has been given to ways to reduce air pollution in the United States. Congress passed the Clean Air Act in 1970 to reduce and control pollution across the country. The Environmental Protection Agency (EPA) issued regulations in 1990 to limit emissions from many major air pollution sources, including aerospace manufacturers, chemical plants, oil refineries, and steel mills. There continue to be pushes across the US at the local, state and federal level to reduce the amount of pollution in the air.

A recent study shows that Parkinson’s Disease may be one of the many health conditions caused by air pollution. Researchers have long thought environmental factors played a role in the development of PD. Now there is evidence that suggests a link between nitrogen dioxide from air pollution and a greater risk for PD. Nitrogen dioxide gets in the air from fuel-burning vehicles like buses, cars, off-road equipment, and trucks. It can also be caused by power plants.

The study was conducted in Seoul, South Korea where there tends to be a higher level of air pollution than the United States. Researchers found study participants who lived in areas with the highest nitrogen dioxide levels were 40 percent more likely to develop Parkinson’s than those who lived in areas with lower exposure levels. It’s not clear yet if air pollution causes Parkinson’s or just accelerates the process.

Experts say Parkinson’s is the fastest-growing brain disease in the world and half of those who have it live in Asia, which is where the study was conducted. More research needs to be done, but scientists believe it could be a crucial finding that helps them understand how and why PD develops.

How to Protect Yourself from Air Pollution

It may seem like air pollution is an overwhelming problem and that you have no control over it. But there are things you can do to protect yourself and breathe cleaner, healthier air. There are many air purifiers on the market, so it can be hard to narrow down the best choice for you and your family. Here are two of our top recommendations:

This model will cover up to 800 square feet every 30 minutes. It runs with a true HEPA filter and is able to detect what’s in the air and adjust accordingly. It’s energy efficient, has four fan speeds and low noise levels. The Alen BreatheSmart 45i Air Purifier costs between $400 and $500 and comes with a lifetime warranty. Read our review of the Alen BreatheSmart 45i Air Purifier.

The Samsung Cube is a great model for smaller spaces. It will cover up to 310 square feet, has a three-stage filtration process and is equipped with a sensor that gives you real time feedback on the air quality in your room. The Cube has a child safety lock, is whisper quiet and energy efficient. The unit will cost between $700 and $800 and comes with a limited one-year warranty. Learn more about the Samsung Cube. 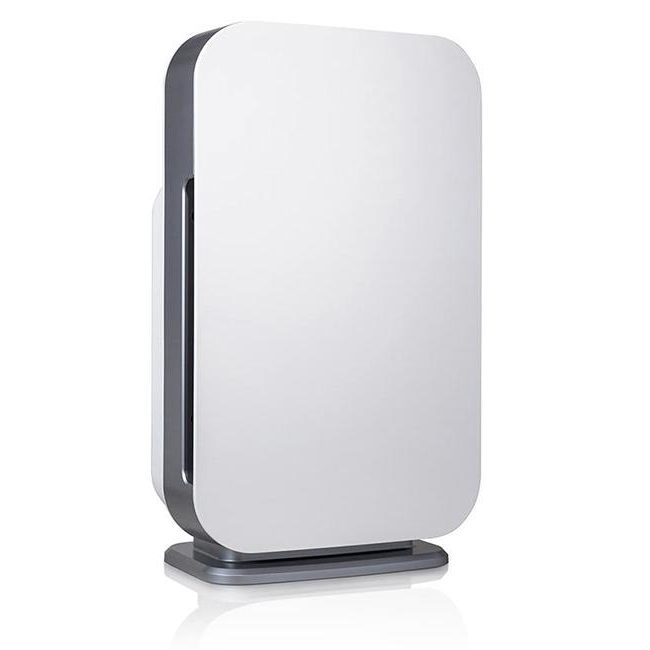 Is the Air in Your Retirement Home Making You Sick? 3 Reasons Eliminating Irritants May Cut Down on Medication